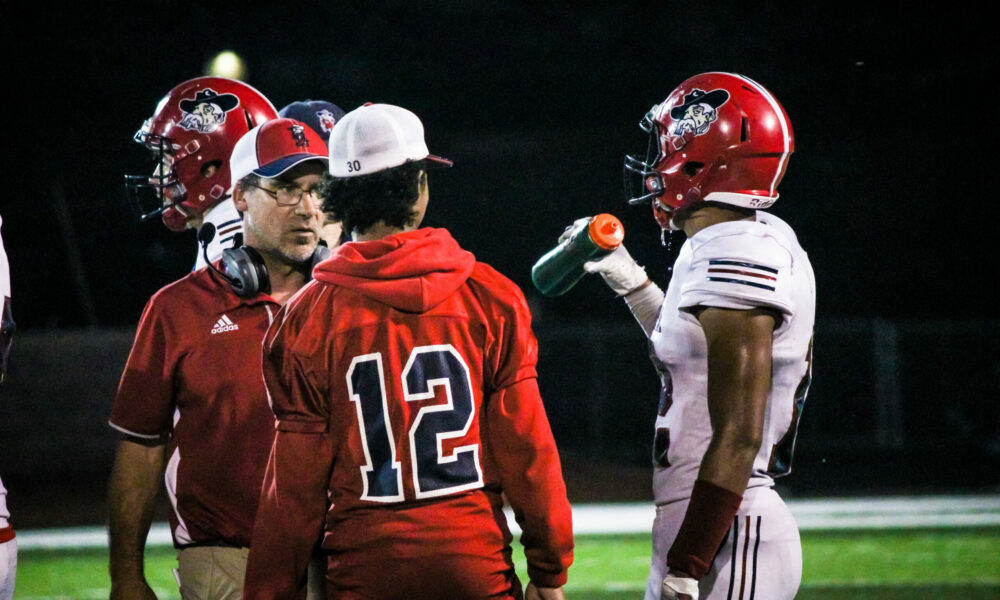 Well, Ameritime Sports, Resource One® and all associated companies within Ameritime’s Integrated Financial Network® are pleased to provide that information to our readers with a series of verbal portraits featuring some of the most iconic local sports names in the area. Our next installment highlights former Valle Quarterback and current Head Coach of the Park Hills Central Rebels, Kory Schweiss. From his humble beginnings to his distinguished coaching career, we break down the journey of the man who just finished off one of the most remarkable seasons in program history.

Kory Schweiss, 46, is the current head football coach for the Central Rebels of Park Hills, MO. He was raised Catholic on a 500-acre farm “halfway between Ste. Genevieve and Farmington.”

“If I wasn’t playing sports, I would be working on the farm,” Schweiss said. “I played baseball, basketball and football, started all three of them in middle school, and played all three of them through high school. My dad really didn’t like me leaving in the summers because they always had hay to haul, but then, you know, the year I started lifting weights, my dad actually started getting into it too because he noticed that I was stronger.”

While attending Valle Catholic High School in Ste. Genevieve, Schweiss almost passed up his opportunity to play football after his Freshman year.

“It’s kind of a funny story,” Schweiss said. “I played [football] my Freshman year, I was playing quarterback and I was having a good time. I skipped a practice to go deer hunting, and when I came to school the following Monday, Coach Bacon, who was the coach at the time, was at the front door; I figured he wouldn’t even notice a Freshman not being there. When he asked where I was, I just kind of froze and I told him I quit, and he was

like, ‘What do you mean?’ Going into the off-season of my Freshman year, he still filled out a football evaluation for me, even though I didn’t go on to the state game.”

“The Freshman quarterback actually got hurt and they didn’t have a backup quarterback for the Freshman team. The religion teacher asked me if I would come to play in the game—he was like, we’re going to have to forfeit the game anyway. Even though I was a Sophomore, some of the Sophomores were playing [with the Freshmen]. So, I went without any practices or anything, I went to play quarterback in the Freshman game and then I just kept going to practices after that.”

After nearly missing his chance to play, Schweiss made the most of the rest of his high school football career. The team won the State Championship during his first three years playing for Valle, and Schweiss was selected as team captain his Senior year.

“When I think about football, I don’t think about just football, I think of the brotherhood,” Schweiss said. “I played high school football with some of my best friends, we hung out all the time. We were like brothers, we were together Monday through Sunday, and there wasn’t really anything that we did when we weren’t with each other.”

After Valle, Schweiss went on to follow the broadcast route and study mass communications in college. However, after realizing that he would have to “move away from the farm life,” which would be an issue because he “really liked the outdoors and hunting and all that good stuff,” Schweiss circled back to sports.

“That’s kind of where the coaching came in,” Schweiss said. “I was always playing a position in football, basketball and baseball where I had to know what everyone else was doing all the time; I really liked the thinking aspect of sports. Coaching was a natural fit, I’d say, just because of the positions I played and how I liked the intellect and the sports, so that’s kind of how I got into it.”

Schweiss likes to think of his coaching career in two phases: the first of which, when he was “young and gung ho about everything.”

“I started as an assistant football coach in 2000, and I became a head coach in 2004,” Schweiss said. “In those four years as an assistant, I had all these ideas in my head of how to be really respected. I tried to go mean. I tried to change the program to [be like] Valle in one year. I was focusing on the results, which you just can’t get to the result without the relationships. I was fighting kids not wanting to play, and we were not very successful. I was kind of ready to be done; I just didn’t have a passion for [coaching anymore].”

The second phase came about as what Schweiss regards as “divine intervention” after a particularly rough night watching film after a game.

“I asked God to give me a sign that I still needed to coach because I was ready to be done,” Schweiss said. “I parked the car when I got home one night, leaned against the car, and I looked up to the sky. It was crazy because at that moment a shooting star shot across the sky, and I haven’t seen very many of those in my life, but this was within 10 seconds of me asking and me just looking up at the sky at 2:00 in the morning. I was like, well, I guess I have to coach.”

With newfound inspiration, Schweiss swapped his “tough guy” mantra for one in which he prioritized his relationships with both his players and with God.

“Early on when I was a coach, I thought, you know, you should win every game because that’s kind of the way it was when I was in school,” Schweiss said. “As I’ve gotten older, I realize that success isn’t about wins and

Schweiss began employing tactics such as Bible studies and weekly conversations about things other than football to strengthen the relationships between his players and the coaching staff. The results showed in 2010 when the Rebels won their first District Championship.

“Having meaningful conversations with the kids and not just, you know, who to block, who to tackle, screaming and yelling and all that kind of stuff that goes along with football, you actually get to talk to them,” Schweiss said. “Once they realize that you can talk to them, all of a sudden that’s when the magic happens—now the kids know that you care about them and now they want to run through a wall for you because you care about them. That year changed my life. I had some really faithful kids in the program.”

Through forging bonds with his players, Schweiss hopes to “hammer home” valuable insights to allow for his players to succeed later in life.

“We try to teach [the kids] the discipline, the dedication, the responsibility and all those things that come along with it,” Schweiss said. “It’s not always going to be perfect, but I think that we at least have our focus in the right spot.”

Having been a math teacher for 22 years and recently making the transition to middle school shop and high school JAG (jobs for American graduates), Schweiss employs many of the same techniques that he uses on the football field in the classroom, “making those connections and being an active advocate for the kids.”

“It goes along a lot along with what I’m doing with the football team as far as making connections with students that need connections,” Schweiss said. “When [a student’s] attendance isn’t good, I can not only talk to them about their attendance, but I can actually try to figure out the reason why they’re falling behind and make them want to come to school. I can try to make a difference with more people than just my football players; there’s a whole other 450 kids that come to the school that I feel like I can make a difference with if I have enough time.”

This desire to create connections and make a difference in other people’s lives is initially what brought Schweiss to Ameritime, which he discovered while attending a sponsored coaching clinic in Crystal City.

“Based on my experiences, [Ameritime] is about relationships; they want to know about your story,” Schweiss said. “Going up there, the first thing they do is they ask a bunch of questions because they can’t help you with your life and your story unless they know all the details. So, the first thing they do is they listen, and you can tell that they actually care: you’re not just going to be a [client] to them, they’re actually going to know who you are.”

Schweiss admits that “the retirement system for private school teachers wasn’t so good,” but with help from Ameritime’s resources, he was able to gain a greater understanding of his finances and create a plan for his retirement.

With that said, Schweiss would not be surprised if he “jumped ship” to Ameritime after retiring from teaching and coaching himself.

“Being a math teacher for 22 years, the financial part of it, that fits perfectly with what I like and what I do coaching,” Schweiss said. “I think that’s probably where my life path is leading me right now. If you’re going to live, you have to have a purpose, and what better purpose is there in life than helping people?”

Learn more about the financial success and stability that Kory has experienced through Ameritime by visiting any of the helpful sites regarding the services we provide at: